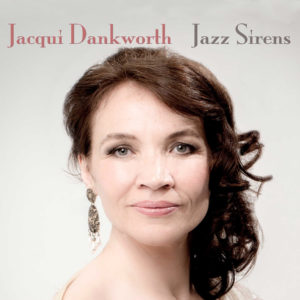 Jacqui Dankworth – daughter of Dame Cleo Laine and Sir John Dankworth – is fast becoming acknowledged as one of the UK’s foremost jazz vocalists. Though, as ‘The Sunday Times’ recently commented, Jacqui is rather more than that. Her incredible versatility makes her one of the finest singers, regardless of category.

Jacqui’s recent performance with her husband – the brilliant Memphis-born pianist and vocalist, Charlie Wood – at Henley-on-Thames’s intimate Kenton theatre very much confirmed Jacqui’s world class credentials. On this occasion Jacqui turned her attention to the most iconic female vocalists of the 20th century – and the singers who defined the ‘Great American Songbook’. These included Ella Fitzgerald, Billie Holiday, Sarah Vaughan, Nina Simone, Peggy Lee, Roberta Flack plus Cleo Laine! Charlie (Jacqui’s musical director) and Jacqui had arranged and curated a diverse repertoire for the concert which was a celebration of the ‘Jazz Sirens’ whose legacy has defined a classic era of jazz singing. Other standards and Broadway show tunes featured too.

Accompanied by Charlie plus Nic French on drums and Geoff Gascoyne on bass – both accomplished players who have worked with many music icons over the years, Jacqui provided an evening of brilliant, world-class entertainment. Her vocal range, versatility, tone and timing are simply superb – and this was one of those rare evenings when one felt privileged to see such an impressive performance, especially in a small and intimate venue like the Kenton. Jacqui has an easy, natural rapport with her audiences. And her understated, quietly amusing words of introduction to the songs in her set also added to the feeling of class – complementing her powerful singing perfectly.

Whatever genre of music you normally follow, I would strongly recommend seeing Jacqui Dankworth and Charlie Wood while they continue their tour of UK venues.