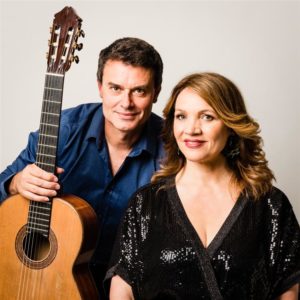 In years to come, the audience privileged enough to enjoy singer Jacqui Dankworth and guitarist Craig Ogden at St George’s Guildhall may just say, “I was there when…”

The first Friday night concert of this year’s King’s Lynn Festival was as pared-down and as stripped back as anyone could wish for.

All that was needed was, in Dankworth, an acclaimed jazz singer of at least 25 years’ standing, and Ogden who first made friends with the guitar at the age of seven.

But anyone expecting a night of Duke Ellington, Benny Goodman and Louis Armstrong numbers were to be gently let down as, instead, Dankworth and Ogden took their audience on a tour of some of the greatest songwriters of the last 60 years.

Paul Simon, Willie Nelson, Burt Bacharach, Hal David and James Taylor all featured in songs, such as “The Water is Wide” (Taylor), Crazy (Nelson), A House Is Not a Home (Bacharach/David) and “It Never Entered My Mind” by Rodgers and Hammerstein, spellbindingly arranged by young guitarist James Girling.

Indeed Ogden described his protege at the Royal Northern College of Music, Manchester, as a man who “improvises like a legend” “truly, disturbingly talented”.

However, the quality of singing and playing was harmonised with the genuine warmth of the two performers who pitched their spoken interludes between songs with gems such as “The Guildhall has always got a lovely, special atmosphere”, from Dankworth.

Ogden was given free rein to play two sets of melodies, one by pre-World War II Paraguayan guitarist Augustin Barrios and the other by Englishman Gary Ryan, before the two performers combined for an encore of Tom Waits’ “Ever Since I Put Your Picture In A Frame”.

This was a concert where the singing voice and stringed instrument spoke for themselves.