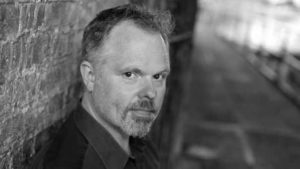 I first encountered Charlie Wood in my home town of Falkirk (an unlikely pairing if ever there was one) when he and his partner on stage and in life Jacqui Dankworth celebrated the great musical partnerships of the golden age of jazz and blues drawing upon songs from their 2016 album Just You, Just Me.

If she was the flickering flame who danced in the dark and caught the eye, he was the glowing embers whose husky and conversational style (a cross between Randy Newman and Ray Charles) stirred the soul and warmed the heart. Qualities which were in abundance in his rare solo gig on the closing night of the Edinburgh Jazz & Blues Festival.

To squeeze fourteen songs into a 70 minute set would suggest a whiplash delivery with curt introductions, but nothing could be further from the truth. For each track was carefully and often comically set up with a diamond cut anecdote full-stopped with either a fact (the lyrics to Hoagy Carmichael’s “Georgia On My Mind” were crafted by his roommate Stuart Gorrell who swapped musical notes for bank notes and never wrote another lyric in his life); a name (Mose Allison, a personal hero and writer of “City Home”, who played over 250 gigs a year well into his eighties before checking out in the winter of 2016 – pre-Trump, wise man); or a quip (“I’m not wearing these glasses to be cool, I need them to read the track list”).

And the track list in question was a sublime collection of songs from his soon-to-be released album “Tomorrow Night” (originally entitled “To Memphis, With Love” which was dropped on the grounds that “there’s already one” by Cyndi Lauper); his recent album “New Repose”, the title track of which was a heartfelt hymn to humanity whose soul lies in the lyric “there is only motion, there is no repose”; and music inspired by and hailing from his hometown of Memphis and his second home The Big Easy which he describes in “Never Going To Stop New Orleans” as “a funky microcosm of the whole human race” where for much of his youth he had a “fantastic time” – to which he added with comic candour “so everyone tells me”.

Not only is Wood a mighty fine musician who is not so much steeped in the blues but to use his own description “swamped”, he is also a terrific songwriter and an engaging storyteller. Each word earns its place. Adjectives are in short supply. And everyday nouns are arranged into a series of snapshots which together paint a picture about the complexities of modern-day life and love. Hence why “The Promised Land” won first prize in the 2015 USA Songwriting Competition (jazz category).

The Blues is his drug of choice (along with the obligatory bourbon) as evident in his self-penned track “Music Is My Monkey” about channelling “the wildness within”. A piano solo without the luxury of a bass player which he jokingly said in future years would become “a left hand exercise” for students. And he should know, for was recently made a Professor of the Guildhall School of Music where he teaches voice and improvisation.

A rare solo gig indeed (in both senses of the word), but one which was lapped up by the appreciative audience who are no doubt looking forward to the October release of “New Repose”. “This is not an ad,” Wood said at the start of his gig. “You can’t get it yet.” Well, this is an ad: buy, download and in the words of “Disco Inferno” by The Trammps “Burn baby, burn”.