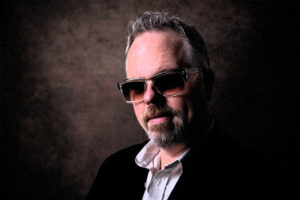 “10% head, 45% heart and 45% gut” is how singer-pianist CHARLIE WOOD describes his new album Tomorrow Night which is his seventh studio album. It will be launched on Perdido Records and features 12 songs which bring him closer to his Memphis roots. Interview by Emily Palmer:

LondonJazz News: What’s the story behind the new album?

Charlie Wood: It’s been a long time in the making! The record is based on the premise of returning to my musical roots. I grew up in Memphis listening to R&B and blues, music that had a profound effect on me. I suppose every record I do is informed by that, but this one explicitly references my musical heritage. It’s a combination of some original material and songs by other people that I really love.

LJN: What sort of sound can listeners expect from the album?

CW: I didn’t want the material to sound dated. I wanted to do more contemporary music that had an emphasis on the grooves, vocal delivery and lyrical content that I grew up listening to. For me the record is 10% head, 45% heart and 45% gut and I hope the listeners feel that too. Music is like food; most people don’t need to get too far down the road with it before they decide whether they like it or not. I want people to like the record, and I don’t want people to have to think about it for very long either!

LJN: Can you tell us a bit about the musicians you worked with?

CW: This kind of music is heavily reliant on the nuances of individual players and the tension that exists between a combination of players. London has such a wealth of fantastic musicians and I was fortunate enough to have some of the best in the recording studio with me. The rhythm section (Chris Allard on guitar, Dudley Phillips on bass and Nic France on drums) are all well-educated, groove players that I have worked with for a long time. With this type of record the horns don’t normally get much of a look in, it’s more about how they play together, but on the title track they really had a chance to have some fun. It’s Mark Nightingale on the trombone, an effortless player that I can’t be without, Brandon Allen who is a monster of a saxophonist and the brilliant Ryan Quigley on trumpet. And listeners will hear a familiar voice on backing vocals – my wife, Jacqui Dankworth!

LJN: The album features songs that are self-penned, how would you describe your writing process?

CW: For this record, I already knew that I wanted visceral, blues melodies so I concentrated on the music first. But typically, I’m sat the piano and the lyrics and melody occur to me simultaneously. A phrase has a certain melody and pitch to it, it’s just about elaborating on that innate musicality. I care a lot about the meaning of the lyrics, more and more so as I get older. I want the lyrics to have a complexity but at the same time to be succinct. Less is more, and I have learnt that through experience.

LJN: Is there one track on the album that stands out for you?

CW: It will be the one that is the least listened to – as is often the case – an original, You Can’t Have My Blues. It’s about someone that is down and out and has had everything taken from him apart from the one thing that can’t be taken away. The melody would feel at home with a Gospel R&B treatment to it; it’s soulful and it feels good. It’s kind of a reharmonized melody which I like. I write a melody with one idea for the harmony and then I disturb it. It’s a chance for it to be genuinely interesting to you, the writer, because you have the chance to see what else can come from it, something that you didn’t think of when you first wrote it. You can pique your own curiosity and I find that really fun and rewarding. This song is the most overt expression of putting a more contemporary harmony behind something with an unmistakably R&B feel. It goes in unexpected places, it’s got a nice spirit to it.

LJN: How did you pick which covers you wanted to record?

CW: I wanted to do under-recorded songs by people that I love. I had to do an Otis Redding song, a BB King song and absolutely had to do a song by Bobby Bland. Upon reflection, there’s a lot of heartbreak in this kind of music! I recorded Bland’s Members Only, it’s a song that I’ve always loved and is very rarely recorded. The lyrics are simple but really direct. It’s such a great song!

LJN: How do you approach songs that have already been recorded by such iconic musicians?

CW: You can’t really better them. I don’t want my versions to sound like a tribute act, but that’s something you can’t really get around. A blues song can be stretched out, the basic succinct format allows for it to be taken in a whole new direction. That’s just not the case with an R&B song; if the arrangement is altered it’s simply not the same song anymore and doesn’t have the same emotional content. We’re not at liberty to disturb arrangements like that. I can’t really change the material, but I can make it my own simply by living through it.

LJN: How do you want the record to make listeners feel?

CW: The music I grew up listening to has got so much heart, it’s sincere and has a real emotional effect on people. I wanted this record to have all of that and I hope it moves the listeners.